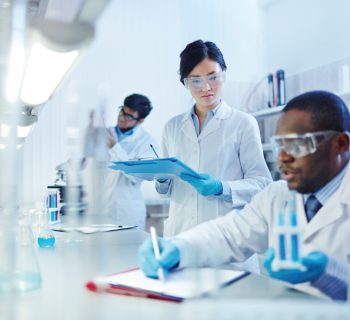 Adeno associated virus (AAV) is a small, helper-dependent DNA virus of the Dependovirus genus of parvoviruses that infects humans and other primates. With the exception of mild immune response at high vector doses, AAV causes no known pathogenicity. AAV can infect a wide variety of both dividing and quiescent cells, and due to this favorable profile of robust infectivity as well as safety, AAV has become an attractive vector for human gene therapy applications, with over 170 clinical trials having been conducted, representing 7.2% of all gene therapy clinical trials to date.

While over 100 variants of AAV have been isolated from various host species, these viruses all share the same genome structure. AAV genomes are generated from double stranded (ds) DNA precursor, which serves as both template for DNA replication and substrate itself for packaging into preformed viral capsids as single stranded (ss) DNA fragments, with both strand polarities (+ or −) packaged with equal efficiencies. The single stranded genome is flanked on both ends by non-coding T-shaped hairpin structures known as inverted terminal repeats (ITRs). These ITRs serve as important elements for the replication, integration, rescue, and packaging of the AAV genome. Between these ITRs are two open reading frames (ORFs), which through alternative splicing are translated into four non-structural (Rep40, Rep52, Rep68, and Rep78), and three structural (VP1, VP2, and VP3) proteins, which code for capsid (Cap) proteins. An alternative ORF within the VP gene codes for the non-structural assembly-activating protein (AAP), which is required for capsid assembly. All other functions needed for AAV reproduction and assembly are provided by the host cell or helper virus coinfection.

The basis for use of AAV as a gene therapy vector is that, in absence of the Rep/Cap proteins or viral coinfection, the host cell alone is capable of uncoating the viral capsid, converting the ssDNA genome to dsDNA, and utilizing DNA repair pathways to form stable extrachromosomal episomes directed by the structure of the ITRs. A therapeutic AAV vector is created by replacing the rep/cap genes of the AAV genome with a therapeutic gene expression cassette. Under this design, the recombinant genome is delivered, converted, stabilized, and expressed in the same manner as the wildtype genome, but lacking the rep/cap genes, is unable to reproduce.

Packaging of a recombinant AAV genome into an AAV capsid minimally requires the ITRs to be in cis with the DNA expression cassette. To generate a functional AAV viral vector free from AAV coding DNA, the proteins required for viral replication (rep, cap, AAP, and helper virus proteins) are provided in trans during virus production. The necessary elements (the ITR flanked expression cassette, rep/cap genes, and helper virus genes) are brought together in producer cell lines by standard gene transfer techniques, such as plasmid transfection or viral transduction. Within the producer cells, rep/cap and helper proteins are expressed, and in a process analogous to a productive wildtype infection, the ITR flanked genome is rescued from the dsDNA plasmid template and packaged as ssDNA into preformed viral capsids. These capsids may then be purified by standard chromatography or centrifugation techniques.

The tissue specificity and immunogenic properties of AAVs are determined by the structure of the viral capsid, which is composed of the three structural proteins VP1, VP2, and VP3 assembled in a 1:1:10 ratio. When assembled, these proteins form a 20nm shell of icosahedral symmetry. While structurally similar, the particular topology of the surface of the capsid shell of the different AAV serotypes may radically alter the cell binding and immunogenic profile of a particular serotype. AAVs utilize multiple cell surface glycans as anchors for cellular attachment and entry, with the particular binding profile of each serotype determined by the structure of the capsid shell. AAV vector transgenes may be cross-packaged into different capsid serotypes depending on the tissues targeted for gene transfer.

These therapeutic particles may be delivered either systemically or directly to the target tissue. Upon binding to cell surface receptors, AAV vectors are internalized through clatherin coated pits, however, the potential for intracellular signaling through surface receptor binding remains an unanswered question. While the spatiotemporal nature of the pathways and mechanisms of viral trafficking and uncoating remain incompletely understood, it is generally accepted that minimally AAV particles are trafficked through endosomal pathways, ultimately resulting in nuclear transport. However, visualization of in-tact AAV particles throughout the cell suggests that alternative, non-mutually exclusive pathways of nuclear entry may exist. Within the nucleus, the single-stranded DNA genome undergoes conversion to dsDNA by utilizing the self-complimentary end of the 3’ ITR as a self-priming motif, allowing cellular polymerases to extend second strand synthesis across the length of the genome. However, this step has been shown to be rate-limiting and potentially detrimental to recombinant AAV vectors.

To relieve this restriction, AAV may be packaged as double stranded DNA by deleting the terminal resolution site within the 3’ ITR. This site is the target for cleavage by the AAV rep protein, which is necessary for single stranded packaging. Lacking this motif, vector DNA is packaged as self-complimentary dsDNA, which is believed to increase vector potency by eliminating the necessity of second strand synthesis. Despite the favorable safety profile and increasing interest in AAV as a gene therapy vectors, the biology of the virus imposes several limitations on its use as a therapeutic tool. The small size of the assembled capsid (20nm) places a physical constraint on the amount of DNA that may be packaged. The precise capacity of the virus remains debated, however, it is generally recognized to be under 5.0kb of total DNA, with efficiency of vector production, heterogeneity of vector product, and potency of the virus improving as transgene size approaches the 4.7kb wildtype genome.

This places particular constraints on the treatment of diseases caused deficiencies in proteins coded by long cDNAs, such as the cystic fibrosis transmembrane conductance regulator in cystic fibrosis, dystrophin in muscular dystrophy, or coagulation factor FVIII for hemophilia A. In these cases, the size of the cDNA approaches or exceeds the ideal packaging capacity of the virus on its own, while still requiring the addition of ITRs and non-coding regulatory control features. While vectors larger than 5.0kb are frequently utilized, these vectors package as genome fragments, which rely on intracellular reassembly after coinfection with a viral fragment containing a partially overlapping, complimentary strand containing the missing regions of transgene DNA, which greatly reduces vector potency. Because of this constraint, transgene size is a critical parameter in the design of AAV vectors. This is of particular concern for self-complimentary, dsDNA designs, which are limited to half the coding length of ssDNA designs.